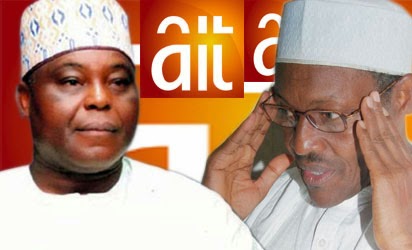 They were received on behalf of the President by his Special Adviser on Media and Publicity, Mr. Femi Adesina, who was joined by a Director of Information, Mr. Justin Abuah.

The message on the giant card read, “The Chairman, Board of Directors, Management and Staff of DAAR Communications Plc, proprietors and operators of Raypower FM, Africa Independent Television and Faaji FM, most heartily felicitate with Your Excellency, President Muhammadu Buhari GCFR and family on the occasions of Eid-el-Maulud, Christmas and New Year 2016.”

The delegation later moved to the Vice President’s office where they were received by his Senior Special Assistant on Documentation, Mr. Sesan Adeboyejo.

Adeboyejo, like Adesina, also received the giant card on behalf of his boss and posed for photographs with members of the delegation.

Dokpesi is currently facing a six-count charge of alleged money laundering. He was charged by the EFCC.

He is currently on bail of N200m, with two sureties in like sum.

The trial judge also directed Dokpesi to surrender his passport, which will only be released to him after application to the court should he be required to travel outside the country.