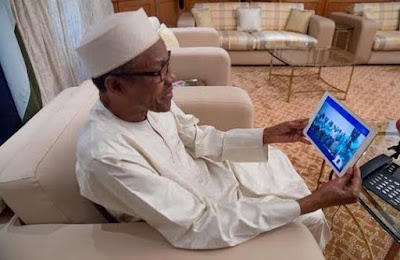 Special adviser to President Buhari on Media and Publicity, Femi
Adesina has revealed the first thing president Buhari does when he wakes
up. Speaking during an interview with Radio continental 102.3
fm, Adesina said:

“He gets to the office in the morning about 9 a.m,
the first thing he requires us to do is get the highlights of
newspapers ready for him, and so before he comes in, we have reviewed
the newspapers, we have done all the highlights and that is the first
thing he looks at. Then he begins to attend to all the other things
lined out for him. Across all the sectors, ministers and directors of
agencies are meeting with him. He is a hard worker and at 73, I wonder
how he does it.

“He does that till early evening, when he then retires home to have a
late lunch and a rest, and then in the early evening he takes on people
that have been scheduled to meet him, if there are. One thing about this
President is that as much as possible, you don’t get to his house and
see a market.

I was told that in the last dispensation the place would still be a beehive of activities as late as 2 a.m.
But this man is methodical, he plans his days and in the process he is
able to attend to much more. All the sectors are receiving attention, I
can assure you.