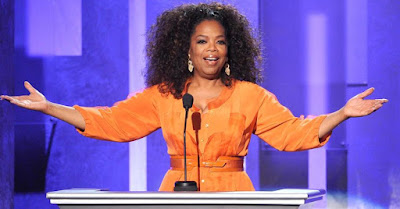 Oprah Winfrey just made more news, saying she lost 26 pounds on her
Weight Watchers diet. Even better, her wallet got a lot fatter.
According to Market Watch, Winfrey racked in a whopping $12 million for
merely writing about how she was able to lose weight and still eat
bread.

“I lost 26 pounds, and I have eaten bread every single day,” she said in her testimonial clip.
An hour after O sent her story into the Twitterverse, Weight Watchers
shares climbed slightly over $2 a share, and since Winfrey owns roughly 6
million shares, the surge in share prices made the celeb $12 million
just like that. 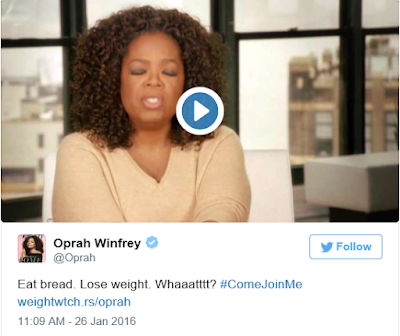 Oprah as a board member and large share owner of the company. She’s made
a fortune since her October investment. Using a price of $13 a share
from Tuesday afternoon, that means she’s made $61 million on her total
investment.

On a per-pound basis, that’s $2.36 million of profits gained for each pound lost.
She has the best of both worlds: getting richer while getting slimmer.
Oprah’s October investment came at a price of $6.79 per share. She
bought about 6.36 million shares, which cost her $43.2 million.
She was also granted 3.51 million options to buy shares at that same
$6.79 price. Combining shares and options, her total stake is worth
almost 10 million shares — 9.88 million shares to be more specific. The
stock has practically doubled in that time, even including the rapid
decline in the past several weeks.
Advertisements