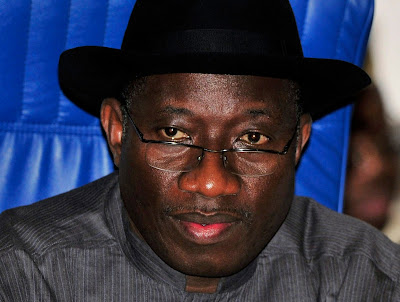 According to the police in Bayelsa, they have arrested five people over
an alleged plan to attack former president Jonathan’s home in Yenagoa,
Bayelsa state.

According to reports, the five men were arrested at a hotel close to the
former president’s house as they put their plans in motion. Confirming
the arrest, Police Public Relations Officer, Bayelsa State Command,
Asinim Butswat, said;

“On the January 6, 2016, based on a tip-off,
detectives from the Anti-Kidnapping and Anti-Vice unit stormed a hotel
premises in Swali community, Yenagoa, and arrested five suspects. The
suspects are Asupha Emeka, 34, Ebipre Ebebi, 25, Samuel Joe, 27, Okilo
Matthew, 25, and Timiere Matthew, 25”

The spokesperson didn’t say why the men plotted to attack Jonathan’s
home but many believe it could be part of a plot to create tension in
the state ahead of a supplementary election in southern Ijaw local
government.

The spokesperson said the suspects are currently being interrogated.