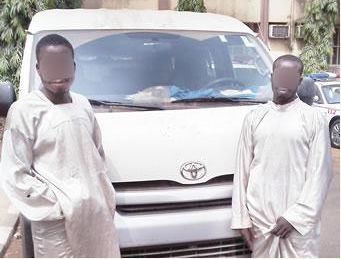 A 25 year old company driver identified as Daniel Ogunlade has been
arrested by the operatives of the Rapid Response Squad (RRS), Lagos
Police Command for stealing the official bus of a company which he works
with. Tribune reports that Daniel who stole the car when he went on an
errand for his boss, was tracked down by the police in Ifo, Ogun state
with the bus.

When interrogated, Daniel who had worked with his
boss for three years, disclosed that he was on his way to the Muritala
Mohammed International Airport Ikeja to pick up a guest of his boss when
he received a call from his Pastor to bring the bus to their church.

He said his pastor told him to tell his boss that armed robbers stole the bus and N150, 000 from him.

“When I was on Third Mainland Bridge around 11.30 a.m., en route
Muritala Muhammed International Airport to pick a client, I received two
calls. One was from my father who told me that my mum was sick and the
other one was from my pastor who directed that I should proceed to his
church in Adiyan, Ogun State. As if propelled by forces beyond me, I
headed straight to the church with the company’s bus. This was contrary
to my itinerary for the day, which was to wait at the airport for the
client with a delayed flight, drop him in Ajao Estate and give some
people N150, 000 and return the vehicle to Lekki. At the church, the
pastor told me to drop the hamper for him, even when I told him that my
boss said I should give it to someone at the airport. He then asked if I
knew that the day, December 24, 2015, was Imoke Day. I answered in the
affirmative, and he directed me again to join the church there. A church
member, Oyetade, joined me in the bus and I was in Ifo to buy fuel when
the bus stopped moving. I invited an electrician and he was about to
start working on it when we the police came. I called the pastor at
about 7.30 p.m. to inform him that the bus had stopped working and he
replied that I should tell my boss that armed robbers snatched the bus
from me. But I didn’t know what to say when my boss called me. I can’t
explain exactly how I got to where the police arrested me. My boss was
doing his best. He was paying me N60,000 monthly as salary. Though I am
struggling with my finances, I never planned to steal the vehicle,” he
said.

The suspect and his accomplice has been taken to the Special Anti-Robbery Squad (SARS) unit, Ikeja, for further investigation.Declaimer: Opinion expressed in comments are those of the comment writers alone and does not reflect or represent Koko Level’s.