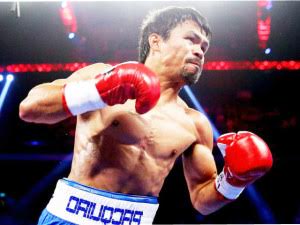 Manny Pacquiao has confirmed his fight with Timothy Bradley in the
spring will be his last fight before he hangs up his gloves to focus on
his political career.

Pacquiao will fight Bradley for a third time on April 9 after losing to
his biggest rival Floyd Mayweather in boxing’s richest fight in history
last May.

Pacquiao’s promoter Bob Arum said last week he did not believe his
fighter would retire after fighting Bradley, but the 37-year-old set the
record straight on Monday night.

“I am retiring from boxing to concentrate on my political career,” said
Pacquiao. “My fight with Timothy Bradley will be my last.”

He also dismissed reports he would be delaying retirement plans in the
hope of tempting undefeated Mayweather out of retirement for a rematch.

“I did not say anything like that. Nobody interviewed me about that. I
will retire after my April 9 fight,” he insisted.