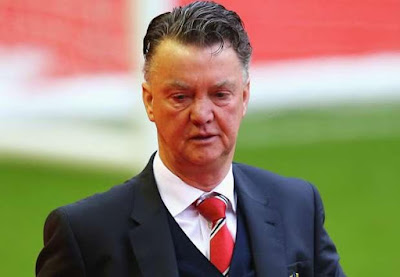 Man U coach Louis van Gaal has insisted that he will not resign despite the huge pressure he is facing in his second year as the coach of Britain’s biggest and most successful club. The Dutch man lost at home last week to Southampton and his style of play has infuriated fans with many calling for him to be sacked and replaced with either Ryan Giggs, Pep Guardiola or Jose Mourinho.
Van Gaal labelled the stories suggesting he had to be persuaded to stay as “awful and horrible” on Thursday’s press conference ahead of the F.A cup clash with Derby County. Asked about the claims he offered to walk away from the job, Van Gaal told reporters:

“I have not mentioned that, ever. I am always fighting. I have signed a three-year contract here. It’s a process, not one game, and I want to continue until the end. When I’m not willing to do that, I don’t think I would have started here one-and-a-half years ago. When I have signed for clubs, I have always spoken a long time with the CEO or with the owners, not only at United, but also at Bayern Munich and Barcelona, and I have the faith that they always support me. But that gives more pressure to you, because you must fulfil the expectations they have of you. Of course we can fulfil those expectations. We are now only halfway. I cannot lose any more, because then I am condemned for the fourth time that I have been sacked.”

Manchester United is fifth in the Premier League. They are out of the Champions League and the League Cup.