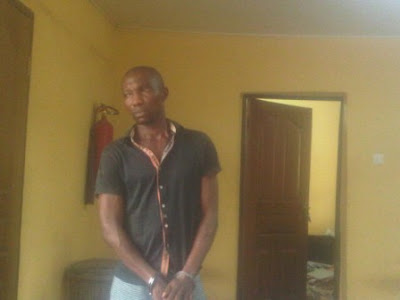 34 year old Uche Okpara was arrested and charged before Isolo
Magistrates’ court on Tuesday, January 12 for alleged theft of N90,000
belonging to a prostitute.
According to P.M News, on December 30, 2015, Okpara stole the money from
Caroline Ibrahim,38, after having sex with her at a guest house located
at Aborishade street, Lawanson, Lagos.

Ms Ibrahim who hails from Edo State said that he paid her N5,00 for a
TDB (till day break). She slept off because she was weak after hours of
marathon sex and when she woke up Okpara had disappeared with the
N90,000 she kept in a bag; money she had hoped to invest in a legitimate
business, quit prostitution and settle down in marriage.

The matter was reported to the police at Itire division. Okpara who had
gone into hiding after allegedly stole the money was arrested by the
police and charged to court with stealing under the criminal code.

During his arraignment in court, Okpara admitted that he engaged Ibrahim
in sex but denied stealing her money and pleaded not guilty. The
presiding Magistrate, Mrs. A.K. Shonubi granted him bail in the sum of
N20,000 with one surety in like sum. Okpara was remanded in prison
custody at Kirikiri pending when he will perfect his bail. The case was
adjourned till January 18, 2016.