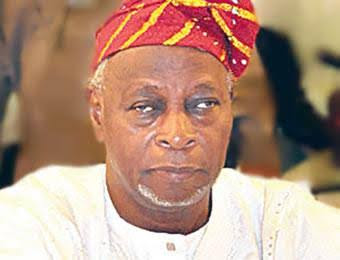 Chairman of the Social Democratic Party, Olu Falae, says he will not
refund the N100 million he collected from former PDP board of Trustees
chairman, Tony Anenih. The said money has been linked to the $2.1
billion arms fund.

Speaking at a press conference in Abuja today, Falae speaking through
the party’s National Publicity Secretary, Abdul Ahmed Isaiq‎, said the
money was handed to his party by Anenih on behalf of PDP

He said the moeny was for the alliance his party entered with PDP to
push for the successful re-election of former President Goodluck
Jonathan. Falae added that there was no way he nor his party could have
known that the money he received was from the money meant for the
purchase of arms. He insisted that his party would not return any money
to the government coffers, since the money it got was neither from Col.
Dasuki nor Office of the National Security Adviser.

“In terms of refund of money, I want to say here that those people who
are refunding money are those who got their money directly from the arms
deal fund. Our fund did not come from the arms deal, our fund came from
an electoral alliance with the PDP and we knew that the PDP had a fund
raising committee that gathered billions of naira and PDP had been in
government for 16 years. So, with that, we knew that the PDP had the
capacity to fund the alliance that was formed with them by the SDP, he
explained. You don’t postulate what you don’t have on the ground, you
can’t build on a non foundation. We, as a political party knew that the
PDP was a capable hand in the electoral alliance which we entered with
them. And we equally knew that the PDP had a fund raising, where it
generated over N20 billion down. So, whether the money came from Col.
Sambo Dasuki or his office, is what we don’t know and it is left for
them to ask Chief Tony Anenih to explain. We knew that the PDP had been
ruling Nigeria for 16 years. So, this was the basis of our electoral
alliance with them. We can’t refund any money to anybody because the
money we got as a party came because of the alliance we had with the PDP
and we have the agreement note from this alliance. If it is possible
that the money Chief Anenih gave us was from the arms deal, it is left
for them to ask Chief Anenih to clarify. As far as we knew, we did not
have any dealing with Dasuki.  Our office did not ever have anything to
do with the office or person of the National Security Adviser, Col.
Sambo Dasuki. ”he said