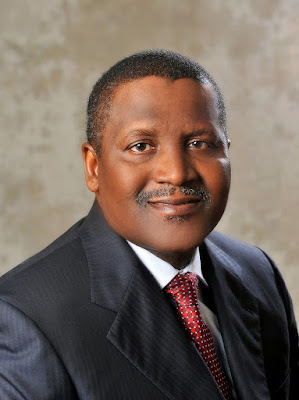 The Governor of Central Bank of Nigeria (CBN) Mr. Godwin Emefiele,
during a tour of the refinery which is projected to refine 650,000
barrels of crude oil per day. assured Dangote Group that it will support
its access to Foreign Exchange in order to build its proposed $14
billion refinery in the country.
The CBN governor said that the support was to help with the importation
of equipment needed to bring the Dangote refinery to reality.
He said:

“Your ongoing 14 billion dollar refinery investment will enjoy our
support, no doubt. We are doing this to fast-track the importation of
equipment you need for a speedy completion of that project and to
encourage other Nigerians to follow your lead” Emefiele said.

“The Dangote Group approached us to indicate their interest to invest in
refining crude, such that petrol-chemicals, fertiliser and fuel will be
produced, about three years ago.

“Today, the three projects, which are valued at 14 billion dollars (N2.8
trillion), are on course and this is highly commendable, ‘’ he said.

“By the time this refinery is completed, it will not only service the
needs of our domestic economy but shore up our international oil
investments.

“Projects like this and our support will encourage more Nigerians to begin to think like the Dangote Group,” the CBN boss added.

Aliko Dangote, Chairman, Dangote Group, on the other hand said that the
refinery would commence commercial operations in early 2018 and that
the fertilizer production aspect of the refinery would be completed by
2017.

“We are set to unveil the world’s largest refinery which
will make Nigeria self-sufficient in petroleum products refining and
also become a major exporter of oil.This project will mark a turning
point in Nigeria’s search for local refining of crude oil.

“We will ensure the value chain in crude oil production is uplifted and
other facilitators properly integrated into our scheme,” he said.