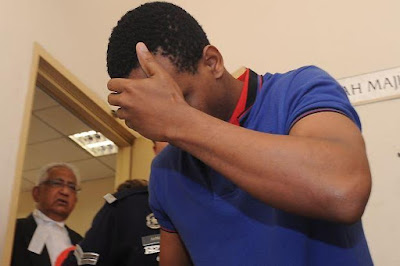 A Nigerian college student who allegedly cheated women on Facebook has been charged at the Magistrate Court in Malaysia.
Collins Sparklys Obianke, 33 (pictured leaving the Petaling Jaya Magistrate Court) who was charged at two separate courts
here pleaded not guilty and claimed trial before magistrate Salamiah
Salleh and magistrate Mohd Azali Ibrahim.
The suspected fraudster was believed to have cheated Foo Pooi Yun,
38
and S. Vanitha, 31 into making them believe that they had received a
parcel containing gifts from overseas that required them to deposit
RM10,500 into a bank account between Aug 24 and Sept 14 2015. The
parcels were supposed to contain a handbag, laptop, mobile phone,
watches, sunglasses and perfume.
He was charged under Section 420 of the Penal Code for cheating which carries 10 years jail, whipping and a fine if convicted.
The court allowed RM11,000 bail in one surety for both charges.
Obianke who was represented by lawyer L. A Gomes was also ordered to
surrender his passport to the court.
Deputy public prosecutor N. Sivashangari and Siti Fatimah Yahya acted for the prosecution.