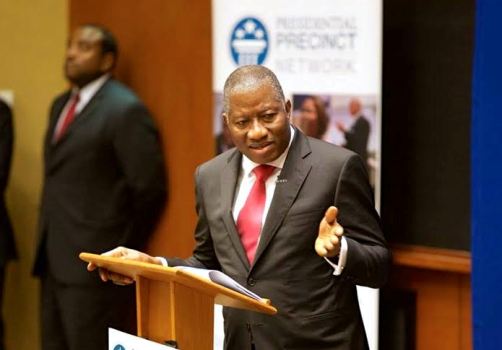 On the 28th of March, 2015, after a tension filled presidential election, Muhammadu Buhari emerged as the new president of Nigeria and Goodluck Jonathan conceded victory to his successor. In a dinner organised in his honour in Geneva, Switzerland last week by Cercle Diplomatique, Jonathan poured out his heart concerning a lot of issues ranging from his foray into politics, Nigeria’s well being and why he conceded to President Buhari immediately after the election. He talked about why he made that  historic telephone to congratulate Buhari even when the results were still being tallied.His full statement during the dinner has just been released and its very revealing! Read it after the cut…

He began: “As you can see, I have not come here with a prepared speech, since what I consider appropriate for this occasion is to just thank you all, members and everyone else in attendance, in a few words, for the dinner and the award, in order not to make the evening look boring. But having said that, I am still tempted to note that if I were to present a written speech, the title, would probably have been “Power Tussle in Africa: A Stumbling Block to Economic Growth.” When Mr. Robert Blum, your President, made his very interesting opening remarks, he introduced me as the former President of Nigeria. He was absolutely correct.

“However, I believe that not many of you here know that the story of my foray into politics has a peculiar ring to it. I entered politics in 1998 and, barely one year after, I got elected as the Deputy Governor of Bayelsa, my state. I later became Governor, Vice President and eventually got elected as the President of my country. I remain the only leader in my country to have travelled that route.

“As the President, I served out my first term but, as Mr. Blum had pointed out earlier, I lost the bid to be re-elected. I am encouraged by the fact that many of you here appreciated my decision not to reject or contest my loss at the polls, not even in the courts as many people had expected.”

“Again, I have to agree with Blum that it was not an easy decision to take. This is because the allure of power and the worries about what would become of you after leaving office constitute an irresistible force. It has an attraction so controlling and powerful that it takes a man who has the fear of God and who loves his people and nation to relinquish power so easily in Africa.

“I was actually in that valley on March 28, 2015. I never knew that the human brain had the capacity for such enhanced rapid thinking. One hundred and one things were going through my mind every second. My country was at the verge of collapse. The tension in the land was abysmally high and palpable, in the months leading to the election. The country became more polarised more than ever before, such that the gap between the North and the South and between Christians and Muslims became quite pronounced.

“In fact, it became so disturbing that some interest groups in the United States began to predict indeed, many Nigerians did buy into this doomsday prophesy as they began to brace themselves for the worst. As the President, I reminded myself that the Government I led had invested so much effort into building our country. I worked hard with my top officials to encourage Nigerians and non-Nigerians to invest in our country to be able to provide jobs and improve the lives of our people.

“We worked hard to grow our economy and to improve and bring Nigeria up as the biggest economy in Africa, with a GDP of about half a trillion dollars”. “Should I then, for the love of power, watch Nigeria slide into a theatre of war, with my fellow country men and women dying, and many more pouring into other nations in Africa and beyond, as refugees? Should I hang on to power and tussle with my challengers, while the investments of hard working citizens of the world go down the drain? I then said to myself, NO!”

I promised my God that I will not let that fate befall Nigeria under my watch, hence the historic telephone call I put through to congratulate my challenger even when the results were still being tallied. I believe that for a country to be great, both the leaders and the led must be prepared to make sacrifices. This is why, everywhere I go, I always advise that the new generation of African leaders must think differently. We can no longer afford to wilfully sacrifice the blood of our citizens on the altar of dangerous partisan politics. It is not worth it.

This reminds me of one of my campaign statements to the effect that my ambition was not worth the shedding of the blood of any Nigerian. Some people took it then as mere political slogan but I knew that I meant it when I said it. ”We must all fight for the enthronement of political stability in Africa, for in it lies the panacea for sustainable growth and development. For Africa to record the kind of advancement that will be competitive and beneficial to our citizens, we must have stable states supported by strong institutions. That appears to be the irreducible minimum that is common to all developed societies. Africa’s political odyssey can distinctly be categorised into three eras, and probably another that would later signpost its classification as a developed continent”.

“Some may doubt this, but it is no fluke that Africa is growing and rising. However I will admit before you here that we still have challenges. That is why people like us did all we could to ensure that Nigeria, the biggest black nation on earth, would not drift into anarchy because such a situation would have spelt doom for the rest of the continent. It would have affected not just Nigeria alone, but the GDP and economy of the entire West Africa. And if the economy of West Africa crashes, it would definitely affect the performance of the economy of the whole of Africa.

As you know, the GDP of Africa is less than three trillion dollars, with only six African countries able to boast of nominal GDP above $100 billion. Even for those in this ‘elite’ category, you can’t really say that they are rich countries. Apart from maybe South Africa that has an industrially competitive economy, the rest are still mainly commodity exporting countries. Even the case of that of South Africa is not very encouraging, because we have a situation which we could refer to as a first world economic performance, yet the ordinary people live the life of the people in the so called third world.”

In the case of Nigeria which is even the biggest economy on the continent, the reality is that we have an unenviable per capita GDP of $3,203, which is the World Bank average for a period covering 2011-2015.” “Even then, I still believe that Africa has a bright future; a promising prognosis that is supported by the fact that the continent remains a very fertile and attractive territory that yields irresistible returns on investments. I believe that in the next few years many more big investors will be jostling to come to Africa, if only we will do the right thing. The process of getting it right has already started with a democratic and increasingly democratising Africa. But we have to deepen and strengthen our democratic credentials through regular, free and fair elections. This will in turn bring about the stability necessary to improve the infrastructure that promotes rapid economic growth. These are the guarantees that would lead us into the next period which I would like to call the era of a developed Africa. I have no doubt in my mind that we will get there some day.

“I will be applying myself diligently to two key areas. First, is to work for good governance by promoting credible and transparent elections. This will bring about the strengthening of our institutions and the enthronement of stability. I also believe that there is the urgent need to create jobs for our teeming young population. This is another area that will be receiving my attention.

I recall that the Vice President of your association made reference in his speech to my achievements in that regard through what we called Youth Enterprises with Innovation (YouWin) and the Nagropreneur programme which encouraged young people to go into agriculture. I believe more programmes like that should be established to promote youth entrepreneurship. That way, we reduce their reliance on paid employment. We will not only teach them to become entrepreneurs, they will also acquire the capacity to employ other people. We will be paying special attention to this segment of our society, especially young people and women.

We will develop programmes that will inculcate in them business skills to be able to set up micro, small and medium enterprises. We shall assist them to access take-off grants when they acquire the relevant skills and capacities. There are many areas that they can go into; food processing, light manufacturing and the services sector are just some of them. I can tell you from experience that this works. As we speak, Our Nagropreneur programme, to promote youth involvement in agriculture value chain, is being scaled up by the African Development Bank presently. It is already being replicated in 19 African countries because of the success of the programme in Nigeria.

I invite all of you here today, cabinet ministers, diplomats and private sector people to remain committed to the cause of improving lives, especially those lives in Africa, and making our world a better place. For those of you that will be sharing in this vision for Africa, I assure you that you will not be disappointed. I am very optimistic that if we encourage young men and women in this continent to develop businesses of their own, the story of Africa will change within 10 years”