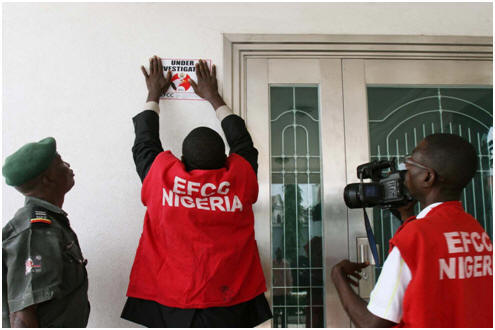 The Federal Government may have ordered
security agents at the nation’s airports and borders to place embattled
Comptroller-General of Nigeria Customs Service, Abdullahi Dikko, under
arrest as soon as he is sighted. KLB  reliably learnt
on Saturday, that the Economic and Financial Crimes Commission had
trailed the ex-customs boss to Dubai in the United Arab Emirates.
On Friday, at about 10am, EFCC
operatives in two buses had stormed Dikko’s residence at Jabi in Abuja
and conducted a thorough search. Sources within the anti-graft agency
said the search took several hours and only ended at about dusk.
However, the agents did not meet Dikko at home.
The EFCC was reported to be looking for
huge amounts of money, in dollars, believed to be stashed in a
residential building owned by the former customs chief. It was not clear
whether the EFCC had found anything incriminating in Dikko’s residence.
On Saturday, the EFCC had relaxed the
siege on the residence of the former Comptroller General of Customs. But
a senior official of the commission, who confided in KLB,
on Saturday, said the EFCC had learnt that Dikko had travelled to
Dubai. He said that the former CG of customs would be arrested on his
arrival back into the country as security agents at airports had been
alerted to do so.
The source did not give the reason for
Dikko’s trip to Dubai. He also refused to speak on the specifics of the
investigation or the reason for the high-profile raid. KLB
also gathered that a high-powered delegation of top operatives of the
commission was billed to travel outside the country for a mission
connected with the ongoing investigation.
The source said, “The commission has information that the man is in Dubai. I can’t say precisely why he is in the UAE; you know that most of our leaders have one problem or the other, medically, which makes them travel out. But we have informed airport authorities in Lagos and Abuja to pick him up as soon as he arrives.”

When contacted, the EFCC spokesman, Wilson Uwujaren, said, “I do not have any information on the issue.”

However, a relative of the ex-customs boss, Mohammed Usman, had on Friday alleged that the EFCC did not secure a search warrant before raiding the house.

Usman, who spoke to the News Agency of Nigeria, said “The information I gathered showed that the operatives, numbering about seven, were in the house to carry out a search for documents.

“A team of about seven operatives of the EFCC in company with some armed policemen arrived at the residence at about 7am and have been in the house for the past five hours.

“From the information available to me, no search warrant was presented before the commencement of the search. As I speak to you, they are currently in my uncle’s bedroom carrying out the search in his absence.”

Usman also expressed misgivings that the operation was carried out in the absence of the former comptroller-general.

“The only people in the house at the commencement of this search and even till now are his children who are below the age of 18,” he said

SATURDAY PUNCH had reported that the search might not be unconnected with the Federal Government’s investigation into revenue generating agencies, including customs and Nigerian Maritime Administration Agency. The Muhammadu Buhari administration is said to be investigating these agencies over non-remittance of revenues into government coffers.

When Dikko was about to end his tenure, there were allegations of corruption against him by groups, which said he did not manage the Customs well.

One of the groups, the Nigerian Customs Transparency Initiative, had sent a petition to the Independent Corrupt Practices and other related offences Commission and the EFCC.

It had accused Dikko of abusing his office, adding that some containers disappeared from some port terminals without trace during his tenure.

The NCTI also claimed that the conditions, on which the Customs, under Dikko’s supervision, spent N3.5bn to upgrade the service’s Internet facilities, were not transparent and must be investigated

But supporters of the former customs helmsman had said he introduced major reforms during his tenure. They added that the reforms led to increased revenue for the Federal Government.

Dikko was appointed by former President Goodluck Jonathan on August 26, 2009. He retired from service on August 17, 2015.