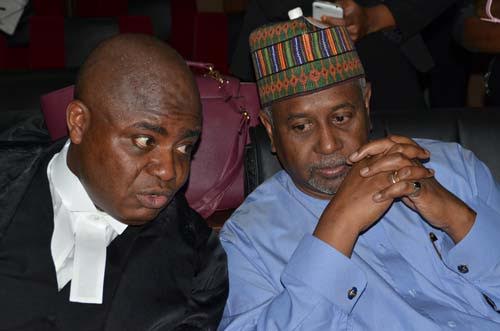 In an interview with Daily Trust, Raji said that he was too small to join words with the president.

“On the isolated case of my client- Sambo Dasuki, I plead with the
President to allow him to enjoy his bail. I am too small to join words
with the president of the country. I will only plead that he allows him
to go on bail. In law, we have judicial review of administrative
actions. We don’t have executive review of judicial decisions. That is
why I would beg the president to allow all those that have been granted
bail to go and enjoy it,” he said.

Dasuki who is standing trial for the misappropriation of $2.1 billion
arms deal, was re-arrested immediately he met his bail condition last
week.

During the presidential media chat last week Wednesday, president Buhari
had suggested that the former NSA will not be released despite
fulfilling his bail condition for fear of him running away and not
facing the charges brought against him. Declaimer: Opinion expressed in comments are those of the comment writers alone and does not reflect or represent Koko Level’s.