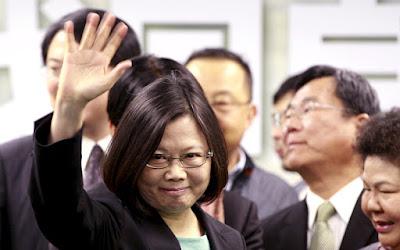 As a British-educated admirer of Margaret Thatcher, Tsai Ing-wen, who
studied in London, is the woman set to become leader of China’s fierce
rival Taiwan was always likely to be regarded with suspicion by
Beijing’s Communist Party apparatus.

The fact that she is head of a party dedicated to promoting the island’s
independence from the Chinese mainland only makes matters worse.

Beijing duly met expectations yesterday by firing a warning shot across
the bows of Tsai Ing-wen, favourite to become first woman leader of
Taiwan – the first woman leader, in fact, in the modern Chinese world.
Zhang Zhijun, China’s minister responsible for Taiwan affairs, warned it
would be “unswerving and firm as a rock” in the face of threats to its
sovereignty over the island.
“Let’s not regret the value of peace and development after we’ve lost it,” he said, in a New Year’s message.
Ms Tsai, an academic by background, is an unusual arrival in the
conservative and male-dominated world of Far East Asian politics. But
polls put her Democratic Progressive Party well in the lead for the
presidential election due to take place in two weeks’ time.

Her sex may not officially be as important to Beijing as her politics –
the DPP, unlike the ruling Kuomintang, believes Taiwan would be better
off declaring the island to be an independent country rather than
maintaining the international community’s polite fiction that it is an
integral part of China.
But the fact that Taiwan will become the second of China’s close and
democratic neighbours to be ruled by a woman – the other being President
Park Geun-Hye of South Korea – will be a constant reminder of the
political revolutions China prefers to resist. China’s ruling inner
circle – the Politburo Standing Committee – has never had a woman
member.