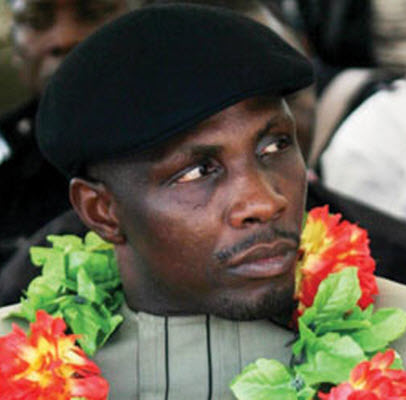 Former Niger Delta warlord,Government Ekpemupolo, popularly known as
Tompolo, has shunned the order of a Federal High Court in Lagos to
unconditionally appear today to answer a 40-count of alleged N13bn fraud
levelled against him  by the Economic and Financial Crimes Commission.
While all his co-accused, including a former Director-General of the
Nigerian Maritime

A Federal High Court in Lagos has ordered an ex-Niger Delta militant leader, Government Ekpemupolo, popularly known as Tompolo, to unconditionally appear before it on Thursday (today) to answer 40 counts of alleged N13bn fraud levelled against him by the Economic and Financial Crimes Commission.

Tompolo had been charged on Tuesday with amended 40 counts of conspiracy, fraud and money laundering alongside an ex-Director-General of the Nigerian Maritime Administration and Safety Agency, Patrick Akpobolokemi.

Justice Ibrahim Buba granted the order to compel Tompolo’s appearance in chambers on Tuesday shortly after the amended charges were filed in court.

The judge, in a copy of the order, sighted by one of our correspondents, held, “That an order is granted to the applicant (EFCC) issuing a summons to compel the appearance of Government Ekpemupolo (a.k.a. Tompolo) before this honourable court, having been alleged to have committed the offences as contained in the body of the charge.

“That leave is granted to the applicant to serve the summons and charge No. FHC/L/553c/2015 on Government Ekpemupolo (a.k.a. Tompolo) by substituted means to wit: affixing same on the conspicuous part of his known address situated at No. 1, Chief Agbanu DDPA Extension, Warri, Delta State.”

The EFCC accused the defendants of conspiracy and fraudulent conversion of NIMASA’s property to their own, contrary to Section 18 (a) of the Money Laundering (Prohibition) (Amendment) Act, 2012.

The prosecution said the accused were liable to punishment under Section 15 (3) of the same Act.

The EFCC had, in December last year, arraigned Akpobolokemi and others on two separate charges before the Federal High Court in Lagos.

He was first arraigned, along with nine others, on December 3 before Justice Saliu Saidu on 30 counts of allegedly laundering N3.4bn while he held sway as the NIMASA’s director-general.

He was again arraigned on December 4 on separate 22 counts before Justice Ibrahim Buba, along with four others for alleged theft and advance fee fraud running into N2.6bn.

He had been granted separate bails by both judges before he was again picked up outside the premises of the court on December 14.

The first count of the fresh charge, which has Tompolo as the 1st defendant and Akpobolokemi as the 2nd defendant, read, “That you, Government Ekpemupolo (alias Tompolo), Patrick Akpobolokemi and Global West Vessel Specialist Limited in 2012, in Lagos, within the jurisdiction of this honourable court, did conspire amongst yourselves to commit an offence, to wit: conversion of the sum of N601, 516.13 and $1,766,428.62, property of the Nigerian Maritime Administration and Safety Agency, knowing that the said sums were proceeds of stealing and thereby committed an offence contrary to Section 18 (a) of the Money Laundering (Prohibition) (Amendment) Act, 2012 and punishable under Section 15 (3) of the same Act.”

Meanwhile, the Alaafin of Oyo, Oba Lamidi Adeyemi, has distanced himself from the Traditional Council of Nigeria, which the EFCC named as one of the beneficiaries of the $2.1bn arms procurement fund.

Speaking to journalists ahead of his 45th coronation anniversary in Oyo on Wednesday, the Alaafin faulted the existence of the TCN, saying it was illegally constituted.

He said he opposed the setting up of the council when the idea was initiated some years ago, adding that the existence of such a body could lead to disharmony among traditional rulers in Nigeria.

He said, “When you talk of the arms deal fund, to the best of my knowledge, none of the traditional rulers in all the 33 local government councils in the state collected from such money. We are not part of it.”

The monarch commended President Muhammadu Buhari’s efforts in the fight against corruption, saying with what the campaign had achieved so far, especially the revelation on the looted arms fund, there was still hope that all could be well with Nigeria.

He, however, cautioned Buhari and the anti-graft agencies on the method being employed to unravel the truth about Nigeria’s current economic situation.

The monarch said, “People in position of authority should know their limitations too and do everything in accordance with the dictates of the constitution in order not to be seen as being vindictive.”