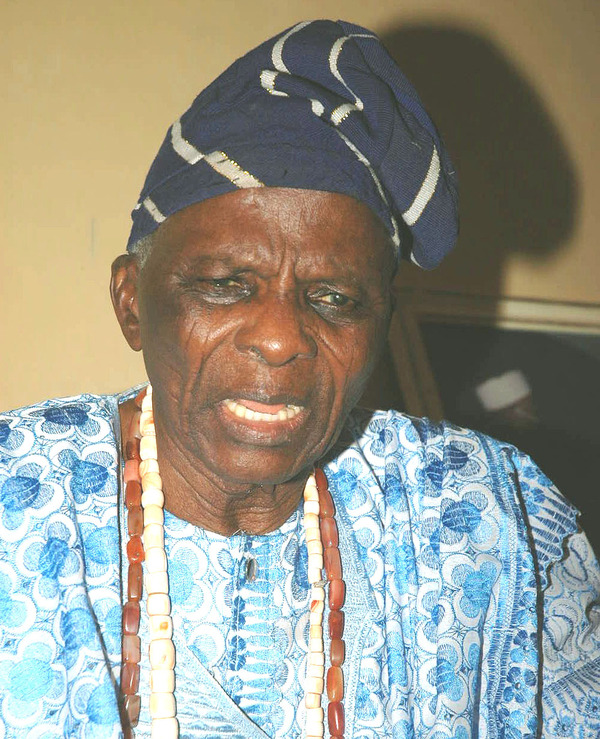 The Olubadan of Ibadan, Oba Samuel Odulana Odugade, is dead.

Palace sources said the monarch died at about 7.30pm on Tuesday in his palace in the Monatan area of Ibadan.

It was gathered that palace guards immediately summoned a son of the deceased, Prof. Femi Lana, who also informed some Ibadan high chiefs about his father’s demise.

Though efforts to get the reaction of Lana were futile on Tuesday, a source close to him said the monarch’s corpse had been deposited at the morgue of an unnamed hospital in Ibadan.

“I can tell you that Prof. Femi Lana and some high chiefs have taken the corpse to the mortuary but I will not tell you the name of the hospital because his death has not been formally announced,” the source said.

Another top source close to the palace, however, said the Olubadan-in-Council, comprising all the high chiefs would have to first pay a condolence visit to the family before the formal announcement of the monarch’s death would be made.

This, the palace source explained, might be done on Wednesday (today), adding that the Olubadan-in-Council or the family could formally announce the death after the condolence visit.

The source said, “The Olubadan is dead. He died peacefully in his sleep in his palace at Monatan and not in the hospital around 7.30pm today (Tuesday) due to old age. You know he celebrated his 100th birthday in April 2014; he would have clocked 102 this year. The palace chiefs invited his son, Prof. Femi Lana, who in turn, informed some high chiefs, including the Ashipa of Ibadanland, Chief Eddy Oyewole.”

Another high chief, who spoke on condition of anonymity because he was not allowed to comment officially on the matter due to tradition, said the monarch’s burial might not be immediate.

“His burial may not be immediate. He was not a Muslim but a strong member of the St. Peter Anglican Church, Aremo, and I’m sure that the church, the Central Council of Ibadan Indigenes and the Olubadan-in-Council will participate in his burial,” the chief said.

With his demise, the Balogun of Ibadanland, Chief Saliu Adetunji, is expected to be named as the new Olubadan by the Olubadan-in-Council.

Adetunji is one of the nine Ibadan high chiefs promoted about three weeks ago by the late monarch.

A soldier who fought in the World War II, Oba Odulana was a seasoned civil servant and a thoroughbred politician who later became a minister in the First Republic.

The late monarch began his elementary education at Saint Andrew’s School, Bamigbola, in the present Lagelu Local Government Area in January 1922 and obtained a transfer to St. Peter’s School, Aremo in 1929.

He completed his middle school education at Mapo Central School in December 1936.

He equally strengthened his education via correspondence college.

He had a brief stint with the United Africa Company as a produce clerk before taking up teaching at the Church Missionary Society Elementary School, Jago, in the present Ona-ara Local Government Area, in 1938.

He, however, quit teaching to pick the more challenging duty of a soldier during the 1939 World War II.

According to his biographers, the lessons learnt at his duty post was well utilised, such that upon the end of the war in 1945, he was put in charge of the demobilisation of returning soldiers in Lagos, which earned him an exemplary character award of the Army Fourth Brigade and this climaxed into an immediate appointment with the Colonial Office Education Department in 1946.

While in the civil service, where he was until 1959, Oba Odulana actively assisted in the establishment of both primary and secondary schools in various parts of the old Western Region of Nigeria.

He voluntarily retired and embraced politics to represent his people in the 1959 pre-independence House of Representatives.

This led to a string of political achievements, such that he was appointed as the Parliamentary Secretary to the late Prime Minister, Alhaji Abubakar Tafawa Balewa, in the country’s first independent cabinet.

In 1963, he attended the epoch-making Commonwealth Conference in London. He also became the country’s Minister of State for Labour.

In 1964, he led the Nigerian Parliamentary delegation to the London Constitutional Conference to restructure the then British colonies of Rhodesia and Nyasaland now known as Malawi, Zimbabwe and Zambia.

Odulana’s journey to the throne started with his appointment as the Mogaji (Head) of his Ladunni family compound, at Oja-Igbo in 1972.

In 1976, he became the Jagun-Olubadanland.