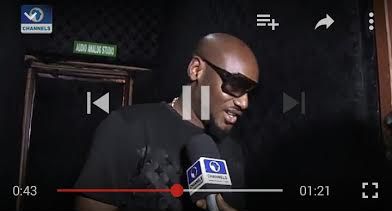 In a chat with Channels TV’s Entertainment News, 2face
reacted to the allegations of song theft by his former band mate –
Blackface. He said,

‘My brother it’s just so unfortunate. I don’t
know where it is coming from. I’m trying to think of different
reasons. I thought maybe his account was hacked or something. Apparently
it wasn’t hacked, so we’ll trash the whole matter.. but I’ve got
nothing but love and respect for him and it’s just so unfortunate that
he’s coming at me like that.’

When asked if he still considers him (Blackface) a friend,
2face said ‘Apparently he doesn’t consider me his friend anymore but I
wish him no ill-will. Let’s leave it like that for now.’
Advertisements