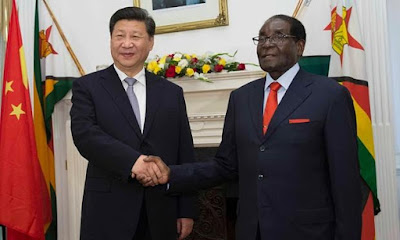 Zimbabwe
has announced that it will make the Chinese yuan legal tender after
Beijing confirmed it would cancel $40m in debts,

AFP reports.
“They [China] said they are cancelling our debts that are maturing
this year and we are in the process of finalising the debt instruments
and calculating the debts,” minister Patrick Chinamasa said in a
statement.


Chinamasa also announced
that Zimbabwe will officially make the
Chinese yuan legal tender as it seeks to increase trade with Beijing.
Zimbabwe abandoned its own dollar in 2009 after hyperinflation, which
had peaked at around 500bn%, rendered it unusable.

It
then started using a slew of foreign currencies, including the US
dollar and the South African rand. The yuan was later added to the
basket of the foreign currencies, but
its use had not been approved yet for public transactions in the market
dominated by the greenback.
Use of the
yuan “will be a function of trade between China and Zimbabwe and
acceptability with customers in Zimbabwe,” the minister added.
Zimbabwe’s central bank chief John Mangudya was in negotiations with
the People’s Bank of China “to see whether we can enhance its usage
here,” said Chinamasa.
China is Zimbabwe’s biggest trading partner following Zimbabwe’s
isolation by its former western trading partners over Harare’s human
rights record.

In early December,Chine presient Xi Jinping stopped over
in Zimbabwe in a rare trip by a world leader to the country, and
presided over the
signing of various agreements, mainly to upgrade and rebuild Zimbabwe’s
infrastructure such as power stations