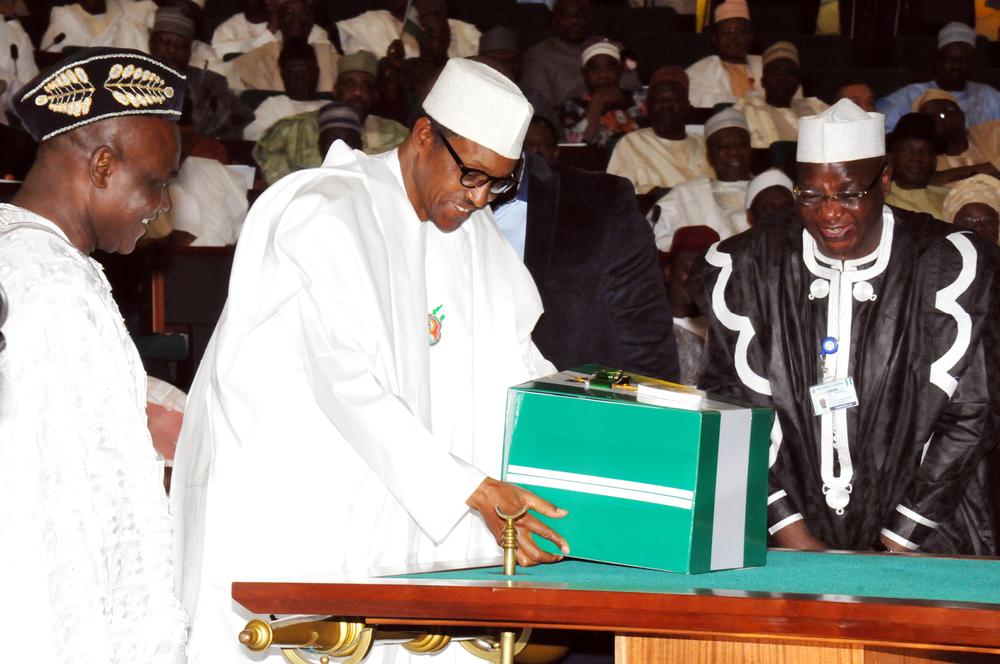 But on Friday, the Leader of the House, Mr. Femi Gbajabiamila, told correspondent  that the “assumptions” of the budget were under threat because of the dwindling fortunes of crude.

Over two weeks ago, while discussing the 2016-2018 MTEF, a member of the joint committees on Finance, Appropriations, Aids/Loans/Debt Management, Mr. Chike Okafor, had raised doubts over the workability of $ 38.

At the time Okafor expressed his worries, oil was about $35.

He had observed, “The 2016 budget has issues with the benchmark; we have been discussing it at the meeting of the joint committees on MTEF.

“When the President brought the MTEF, the benchmark was pegged at $38. Now, it is $35, far below the benchmark.”

In the interview with Saturday PUNCH, Gbajabiamila suggested that the Federal Government should consider the option of not using oil revenues as the main financing source for the 2016 budget. He explained that the government must begin to think about the reality that oil revenues might not be enough in the coming year.

The leader stated that non-oil revenues should take the lead while crude oil would be an alternative source because of the global oil price crisis.

He gave details of his position, “It is clear we will have to look to other sources of funding and perhaps, more borrowing on even more favourable terms. Diversification of the economy has to be our priority.

“I would have preferred and it is not too late, a situation where (we) close our eyes to the petrol dollar for next year’s budget and pretend we don’t even have oil revenue. “Base the revenue on a zero per cent benchmark and work on the expected revenue from non oil -customs, internal revenues, etc. We work with that and budget based on that.

“Clearly, all assumptions (of the 2016 budget) have changed.”

It was learns that the House was unlikely to continue to stick to the $38 proposed as the crude oil benchmark for the 2016 budget.

While Buhari was presenting the estimates of the N6.08trn to a joint session of the National Assembly, many members were expressing doubts over the sustainability of $38 against the tumbling prices of crude globally.

Buhari himself admitted while presenting the budget estimates on Tuesday that a barrel of crude was “$32”, a figure that was $6 below the budgeted $38.

Investigations showed that members of the key committees of the House on Finance, Appropriations, Aids /Loans/ Debt Management that would work on the budget in January, were already exchanging ideas on “realistic oil benchmark.”

An official of the House told Saturday PUNCH that there was “no way $38 could be sustainable.”

The official spoke more, “We are all aware of what is happening to crude oil prices. We have gone down far below $38. “There are projections that we should expect a further dip in prices, which could mean restructuring the entire budget.

“So, the committees, on resumption from vacation in January, should be looking at realistic figures of between $27 to $30.

“This current $38 is not realistic; it will be a huge joke sticking to it.”

But the Senate is optimistic that IMF’s prediction will not affect all the projections and criteria already approved by the National Assembly for the implementation of the 2016 budget. The Chairman, Senate Committee on Banking, Insurance and Other Financial Institutions, Senator Rafiu Ibrahim, in an interview with Saturday PUNCH on Friday, said oil price would rise in 2016.

He stated, “The benchmark, which is contained in the Medium Term Expenditure Framework and Fiscal Strategy Paper forwarded to the National Assembly by President Muhammadu Buhari, had already been approved.

“We are, at the moment, confident that the oil benchmark of $38 is appropriate for the 2016 budget implementation. We are also confident that rather than going down, the price of crude will rise in the New Year based on the various projections by experts. So there is no cause for alarm.”

Ibrahim said the fact that the IMF had raised the alarm on the possible slide in the price of crude in the international market below the projected $38 would not make the National Assembly alter the benchmark out of panic.

When asked if the government would reduce downward the budget benchmark price, the spokesperson for the Ministry of Budget and National Planning, Mr. Salisu Haiba, told one of our correspondents in a telephone interview on Friday that the budget had already been submitted to the National Assembly, adding that it was now left for the lawmakers to work on the fiscal document.

He said, “All assumptions have been taken into consideration by economic experts before arriving at the $38 benchmark by the government.

“The ball is now in the court of the National Assembly to subject it to legislative scrutiny based on their own analysis of the situation.”

A top official in the Ministry of Budget and National Planning confided in our correspondent that the ministry while preparing the budget had taken steps to reduce the nation’s reliance on revenue from oil in 2016 owing to uncertainties in the global oil market. For instance, the official who pleaded not to be named as he was not officially permitted to speak on the matter, said that out of the total revenue of N3.8tn, oil related revenues would only account for about N820bn or 21.2 per cent.

He said, “You will recall that oil prices started dropping in June last year and that caused a serious problem in the implementation of the 2015 budget because revenues were down by about 50 per cent.

“So what we did while drawing this budget was to look at the trends in the past and we observed that it would be wise to DE-emphasise revenues from oil and this made us to choose a conservative figure of $38 per barrel so that even if oil falls below that price, it would be easy for us to suffer a further 50 per cent decline in revenue.

“And so it is our belief that even if oil falls below $38 per barrel, we won’t have serious crisis in implementing the budget because we have been proactive from the beginning.”Declaimer: Opinion expressed in comments are those of the comment writers alone and does not reflect or represent Koko Level’s.