President Buhari this morning presented the N6.08 billion 2016 budget
to the National Assembly members. During his speech, President Buhari
said Nigeria remains committed to diversification to build and reflate
the economy. On the current fuel scarcity, Buhari apologized to
Nigerians & blamed it on some stakeholders who have refused to
embrace change. He said fuel pump price will remain at N87 for now.


N396bn is voted for education, being largest sectoral allocation. The
Health sector gets N296bn while Defence received N294bn, saying the
administration’s actions will speak for him.
He then solicited support of Nigerians for the Nation’s economy

Buhari presents N6.08trn budget. He has directed the PPRA to sell
petrol at N87 per litre for now. He apologises to Nigerians on fuel
scarcity , saying government is working very hard to cushion the effect. 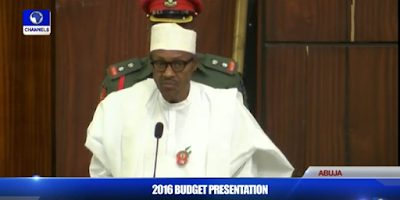 He said the trust in govt is at an all time low but that his govt will
not betray the trust put in them. He said his government has the will,
resources and commitment to deliver to the Nigerian people. 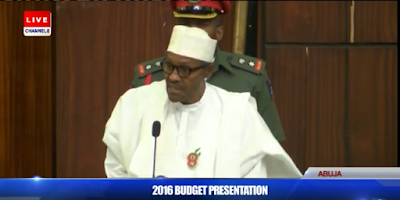 He announced that a Conditional Cash Transfers to the poor will be
created and that it will be managed by the Vice President’s office. On
the educational sector, Buhari said 500, 000 teachers will be recruited.

On the diversification of the economy, Buhari said young farmers and miners will be encouraged.

He added that N1.884 Trillion shall be borrowed to fund the budget. 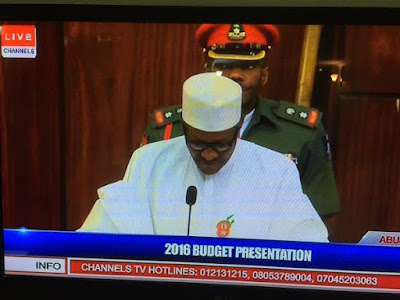