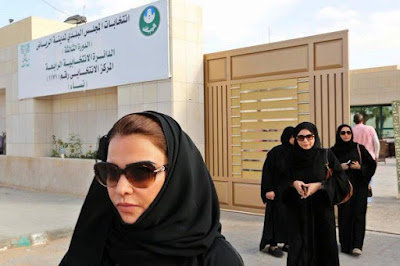 According to the results published by Al Arabiya television on its website, six women who vied in Saturday’s election will be seated on local councils, Al Arabiya reported. Among
the 6,440 candidates contesting some 2,100 seats were more than 900
women, who overcame a number of obstacles to participate in the landmark
poll.
One of the female winners was Salma bint Hizab al-Oteibi, who was
elected to the council of Madrakah, a region in the holy city of Mecca.
Hizab al-Oteibi was running against seven men and two women.

Other winners includes Lama al-Suleiman and Rasha Hufaithi in Jeddah, Hanouf
al-Hazimi in Al Jouf province, and Sanaa al-Hammam and Masoumah
Abdelreda in the Ahsa region.
Before his death in January, King Abdullah ordered the inclusion of
women in municipal elections, the only nationwide vote in the absolute
monarchy. He also appointed women to the country’s 150-member
Consultative Council and opened more areas of the labour market to them
as part of the royal family’s gradual ease of restrictions on the role
of women in society and the economy.
At the same time, the changes are more cosmetic than seismic.
Municipal council representatives deal with issues such as parking
facilities and hospital improvements, and not the overarching issues
that affect a society where women are still banned from driving and need
a male guardian’s permission to have some surgical procedures.
During the election campaign, candidates were not allowed to
address voters of the opposite sex but were permitted to use segregated halls
with audio and visual links. Women were not allowed to display their
photos, so all candidates were banned from using them during the
election.

As a result, women accounted for less than 10 per cent of
registered voters and few female candidates were expected to be
elected. AFP reports that of the 1.48 million voters registered for the Dec 12 ballot, 130,637
were women. Saudi Arabia has a population of about 28 million including
foreign nationals.Declaimer: Opinion expressed in comments are those of the comment writers alone and does not reflect or represent Koko Level’s.