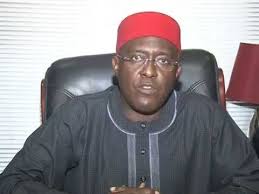 The Office of the National Security Adviser told a Federal High Court in Abuja on Tuesday that it had in November 2015 petitioned the Economic and Financial Crimes Commission to investigate about 78 firms and individuals, including a firm owned by the National Publicity Secretary of the Peoples Democratic Party, Chief Olisa Metuh, that were allegedly paid about N1.4bn by the ONSA for non-existing contracts.

This was revealed in the electronic mandate issued by a former NSA, Col. Sambo Dasuki (retd.), to the Abuja branch of the Central Bank of Nigeria, authorising N1.4bn to 78 beneficiaries.

The document was tendered and admitted as exhibits by the court presided over by Justice Okon Abang on Tuesday, during the resumed trial of Metuh and his company, Destra Investments Limited, who were charged with seven counts of money laundering and fraudulent receipt of N400m meant for procurement of arms from the NSA office on November 22, 2014.

“What is written on the document is payment for security services,” a Legal Adviser at the Office of the NSA, Mr. Bali Ndam, said when EFCC’s prosecuting counsel, Mr. Sylvanus Tahir, showed to him the electronic mandate on Tuesday.

Our correspondent on Tuesday sighted the e-mandate which showed that N1.4bn was released by the CBN on Dasuki’s instruction to the CBN.

When the defence counsel, Mr. Onyechi Ikpeazu (SAN), confronted Ndam with the document during cross-examination, the witness read other part of the document stating that the ONSA paid Metuh for providing “three operational vehicles.”

The prosecution alleged in the charges that Metuh and his firm used the N400m paid to them by ONSA for the PDP’s campaign, and were said to have given about N21m to a former Chairman, Board of Trustees of the PDP, Chief Tony Anenih.

It alleged that the money was “part of the proceeds of an unlawful activity” of the immediate past NSA (Dasuki).

Ndam, who appeared as the third prosecution witness in court on Tuesday, said the incumbent NSA, Maj. Gen. Babagana Monguno (retd.), sent a petition dated November 28, 2015 to the commission over “payment of contracts without award.”

Led in evidence by the prosecuting counsel, Tahir, the witness said “a list of companies and individuals about 78 in number” was attached to the NSA’s petition to the EFCC.

He said he could “vividly remember” that Metuh’s firm, Destra Investments Limited, with whom the PDP spokesperson is standing trial, was the 78th beneficiary of the allegedly fraudulent payment.

The witness said, “On November 28, 2015, the ONSA forwarded a letter to the Chairman of the EFCC and the title of the letter was ‘payment of contracts without award’ for their necessary action.

“The letter forwarded a list of companies and individuals covering almost about 78.

“The one I can remember vividly is Destra Investment Limited.

“Following the letter, the EFCC sent a letter to the ONSA requesting e-payment mandate for these companies. The (EFCC’s) letter dated January 13, 2016 and signed by one Ibrahim Musa.

“The ONSA replied the request of EFCC forwarding the list of e-payment mandate, number 0799 to the EFCC on January 14, 2016. It was signed by one M. Abdulraheem, Group Captain.

“After the letter was forwarded to the EFCC, I was also invited to write a statement which I did.”

Justice Abang later overruled the objection by the defence lawyer, Mr. Onyechi Ikpeazu (SAN), to the admissibility of the petitions and other documents with their annexure as exhibits.

The exhibits included a petition by the incumbent NSA, Monguno, to the EFCC asking for investigation of some payments to the 78 companies and individuals without any contract award.

The petition had with it an annexure of the list of the 78 beneficiaries.

The other exhibits also included a letter by the EFCC to the ONSA, asking for the electronic mandate authorising the payments to Metuh’s firm and other beneficiaries.

The last of the exhibits was the response by the ONSA to the EFCC attaching the electronic mandate issued by the then NSA, Col. Sambo Dasuki (retd.), addressed to the Controller of the Abuja branch of the CBN.

But during the cross examination, the defence counsel, Ikpeazu, said with Ndam’s witness statement only made after the charges had been filed against the defendants, it was obvious that he (the witness) was only “procured to manufacture evidence to entangle the defendants.”

Metuh, who has a pending application for variation of the conditions of bail granted him by the court, was also produced in court in handcuffs by prison officials on Tuesday.

Justice Abang fixed Wednesday for the hearing of the application for variation of the bail terms, which his lawyer said he had laboured unsuccessfully to fulfil.